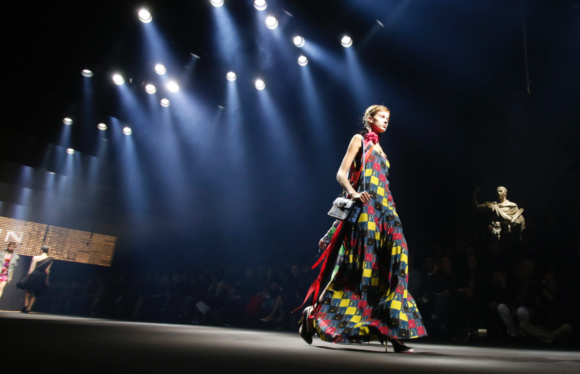 With all the talk stirred up by the recent firing of long time vogue editor Lucinda Chambers, and subsequent Vestoj article, I thought it timely to republish this story originally posted on June 7th. Ageism in fashion design and apparently publishing occurs often without acknowledgement.

With graduation season upon us I think it’s fitting to address a subject that is rarely spoken about but is constantly with us in the fashion world, ageism in fashion design. We all know that model’s careers are short lived, but designers as well, rarely enjoy a fruitful career until retirement age. More often than not the rug is pulled out from under them at the height of their careers. With few exceptions (Karl Lagerfeld comes to mind) creative directors over the age of 50 are rare. Equally strange is that this realization has only recently come to me. I think it’s due to the fact that in design we work hard, put in long hours and don’t have time to think about it until it’s too late.

Job security was never one of the perks of being a designer, but with talent and an impressive resume most designers land on their feet after losing or leaving a job, that is until age enters the equation. I’ve touched on this subject before in Year Of Living Designer Free, which sites the game of musical chairs designers are forced to play by the conglomerates that now control the most prominent fashion houses.

The nature of fashion, especially the high end, is always looking for the next new thing, the new enfant terrible, but there are only so many prime design jobs, and with younger talent entering the arena each year it puts tremendous pressure on the top spots. Young talent is sometimes catapulted to prime time before they have the practical experience to handle the pressure and the time management skills necessary to get the job done. It’s also true that some older designers may rest on their laurels and fall back on familiar territory, but I’ve seen too many exceptionally talented designers forced to end their careers early.

This phenomenon does not only happen at the top of the pyramid but throughout the ranks of design. It’s the rare design studio that has diversity in age, unlike the sample rooms that work in tandem with design; there drapers, pattern makers, and sample hands of all ages work together with a much greater level of security. An experienced older draper or tailor is valued and will always be able to find employment should they lose their job. The expertise a designer acquires over the years is not treated with the same respect, and in time the years of experience become a liability.

Alber Elbaz is a perfect example of an extremely talented and universally respected designer whose career was abruptly interrupted. I take care to not say ended, I’m hopeful that someone will have the good sense to hire him yet. In October of 2015 Elbaz, then 54, was dismissed from his position as creative director of Lanvin. The industry was shocked. Elbaz was credited with transforming the house into a major player on the fashion stage, acclaimed by critics and customers alike. The atelier was so outraged by his firing they staged a protest, but to no avail, a year and a half later he is still without a position. At a speaking engagement last month at Parsons Elbaz said, “I hear nowadays too often, young designer, old designer, young actress, old actress, older writer, younger writer, and I’m like, is it really about being young or old? Or is it about being good or bad?” this is my point exactly.

Francisco Costa, creative director of Calvin Klein since Klein’s retirement in 2003, suffered a similar fate. Though it’s unremarkable that a design house may want a change of creative vision after more than a decade, it is alarming that designers of the caliber of Costa and Elbaz are not judged solely on their accomplishments and reputation.

Even established designers of eponymous collections are vulnerable. In 2015, Donna Karen was muscled out of her company by then owners LVMH. Her key designers were then unceremoniously let go. The team from Public School was brought in for a newer, edgier perspective. In less than two years the company was sold, the new designers gone, and the brand is in disarray, rumored to become more mass market.

Ralph Rucci, known for his couture level creations, was also forced out of his own company. I met with him in the summer of 2014, newly implanted in a spectacular atelier, gut renovated to reflect his vision. He seemed at peace and told me he felt like he was finally home, adding that the new space would be his final workplace. It perfectly reflected him and the exacting nature of his work. The sample room was behind a glass wall, everything was white including the lab coats worn by the workers. Shots of colors came only from the clothes, suspended like sculptures from hangers. It reminded me of an operating room, it was that pristine. Three months later his financial backers forced him out and stripped him of his name.

People in design work with passion, their heart and soul go into every collection. Long hours, lack of security, and mediocre pay for all but the top players are accepted with little complaint because most designers are doing what they love. The system, as it has evolved, from small family like companies to large publicly traded corporations, take advantage of this knowing there is a large pool of talent always in the wings. New graduates should be made aware of the reality of ageism in fashion design and plan their careers accordingly. The prime earning years go by fast.

But the landscape is changing. The advent of the Internet is transforming how people consume fashion. I also believe that the customer will tire of the lack of exclusivity. The same product is sold in designer boutiques from Shanghai to New York. Thousands of pieces cut per style and even more for shoes and bags. Young people are more concerned with ethically produced and sourced fashion, which naturally lends itself to smaller distribution. My hope for the future is a move back towards smaller companies and more collaboration between online retailers and seasoned designers. Influencers are already producing product for ecommerce, it makes sense to extend this to proven talent.