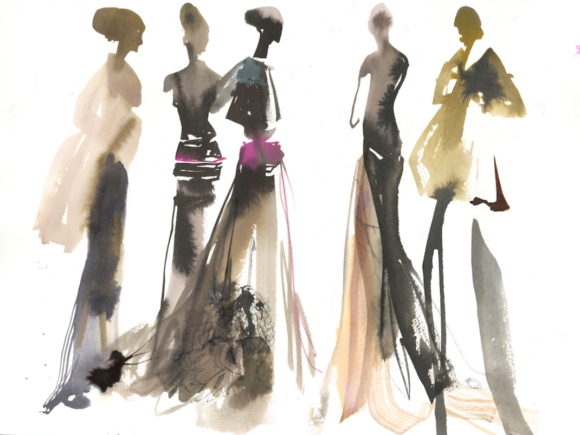 News spread quickly throughout the fashion world of the apparent  suicide of Designer Kate Spade, found in her Park Avenue Apartment Tuesday morning. Ms. Spade enjoyed rapid and phenomenal success with her handbag company launched in 1993 on the simple premise of positioning herself between LL Bean and Prada.  The affordable bags stood out for their boxy shapes and happy colors.  Kate, with her husband and business partner, sold the company entirely in 2006.

Though we don’t know the circumstances of this tragic event I can’t help but look at the bigger picture of the state of the fashion industry here in New York.  The luxury market, where I’ve spent my career, never fully recovered from the financial crisis of 2008.  The major retailers have struggled to adapt to changes in consumer’s buying habits and competition from online retailers.  But change is to be expected in all industries and businesses must adapt to change.  With change also comes opportunity.  What concerns me most is the pervading dark mood of the people in the industry at large.

I speak with people nearly everyday who complain of stress, heavy workloads, long hours and sluggish sales. Add to that lack of job security as layoffs at some of the biggest employers in the fashion industry have continued for several years, despite the rosy unemployment figures.  Furthermore, fashion increasingly turns to freelancers, not included in these reports, which puts into question the accuracy.

Most people, who pursue design as a profession, are passionate and devoted to the creative process. Since 2000 however, I’ve witnessed a shift from companies run like a family business to large corporate entities.  Design teams expanded and fragmented, narrowing the scope of individual talent. The unique vision of creative directors and founders of companies was diminished in favor of branding and capitalizing on the name to sell a wider range of products. My post on Monday relates to this, charting the accomplishments of Cristóbal Balenciaga and the Balenciaga brand of today. I believe integrity and originality suffered when fashion companies went public. The stock price became the new measure of success with constant pressure for expansion.  Just how much branded product does this world need? The exclusivity and originality that once defined luxury became impediments to growth.

Established, independent houses find it difficult to survive in New York. Ralph Rucci, known for his couture quality clothes and loyal following of discerning clients, lost his company and name to investors. Isabel Toledo, a true artist and designer capable of creating an intricate garment from concept to finished product, an art all but lost for many designers, has also receded from the public eye and I suspect closed her wholesale business.  The current New York Fashion calendar would benefit to have both of these designers included, raising the bar for everyone.

New York is not known for nurturing talent. The Council Of Fashion Designers of America has never recognized either of the above-mentioned designers. This despite a large body of work, critical acclaim and numerous prestigious awards between them.  The CFDA Awards, held on Monday night, were widely criticized for awarding Kim Kardashian-West, Influencer of the Year and James Jebbia of Supreme, Menswear Designer of the Year.  He accepted the honor admitting that he doesn’t consider himself a designer or his brand a fashion house. Raf Simmons was named the Designer of the Year for the second year in a row.  There were no surprises at the CFDA Awards. They choose from a limited pool of select, well-established brands, with only a few exceptions.

My hope for the fashion industry is to return to its roots. That includes respect and support of individual talents committed to creating modern clothes that inspire the women who wear them.  Azzedine Alaia, is a perfect example of this.  His untimely death leaves in question what will become of his company. Though I’ve heard they are respectfully continuing with the people who worked closest to him.  Only time will tell.  Dries Van Noten is another designer who has achieved success while remaining true to his singular vision and independence.  We will never go back to mainly independent companies. But it’s important that they have a big enough piece of the pie, which I see happening online already. If we as consumers, and the fashion press, promote and support independent and emerging talent, perhaps the industry can slow the trend of rapid corporatization.  This will contribute to sustainability and increased opportunity for a more diverse range of talent. The success of small to midsize companies can increase the stability and well being of the entire industry and the people who work in it.