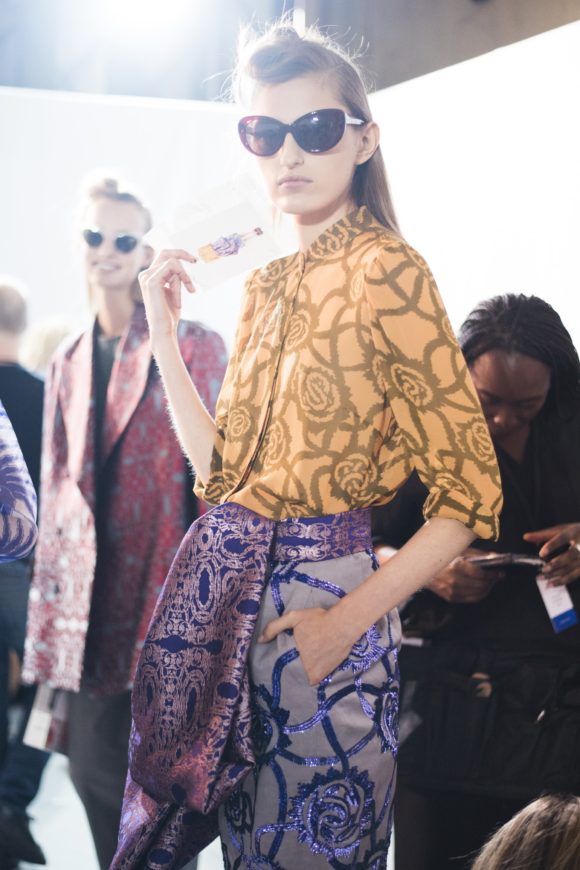 In this age of information overload, 24 hour news cycle, Instagram stars, street style stars, twitter and face book, it’s difficult to digest all that happens in fashion in the course of a season, let alone begin to understand the process of a serious designer. The Dries Van Noten documentary Dries, by Reiner Holzemer is the perfect antidote to this. It honestly depicts the creative process by one of the most enigmatic designers working today. There is not a dramatic arc to the film, such as following one collection from the beginning to the climax of the show. Instead it shows the redundancy of the development of many seasons over a year and revisits the designer’s most significant shows.

For a cerebral designer like Dries Van Noten, each step of the process is personal and intense. He begins with a feeling, “I need my materials, what I can use to tell my story”. The design team begins to develop fabrics with the cooperation of the premier fabric mills. They’ll spend 4 to 5 months on the fabric development alone.

The studio, and company are reflective of his low key, intense and earnest personality. The Antwerp headquarters are homey and bohemian yet orderly and efficient. It is the antithesis of the sleek corporate offices that have become the norm for an international fashion brand. The close-knit design team includes his life and creative partner of nearly 30 years, Patrick Vangheluwe.

Van Noten and Vangheluwe apply the same intensity to the home and garden of their estate, Ringenhof. Domestic moments of them preparing dinner, arranging flowers and in the garden give as much insight to their aesthetic lives and leanings as the studio footage. Just to catch this glimpse into their private world alone is worth the hour and a half investment.

Void of narration, the film instead captures snippets of conversations and on camera answers mostly from Van Noten, Vangheluwe and noted fashion experts including Suzy Menkes, with a couple gems from Iris Apfel. Early in the film Van Noten states, “Fashion is such an empty word. The word fashion is something I don’t like because fashion is something that is over in six months. I don’t want to make fast product, I want things that are growing with you as a person, as a character, so it can become part of your personality.

Suzy Menkes confirms the sentiment with, “A lot of the Belgium designers, particularly Dries, look at the real women of the world. There’s a certainty about the way you look if you wear Dries Van Noten clothes, but the certainty is yours. You choose how to look, and take the clothes and make them work for you”. But maybe Iris Apfel said it best, “Dries is the keeper of the flame”.

Dries is currently streaming on Netflix.