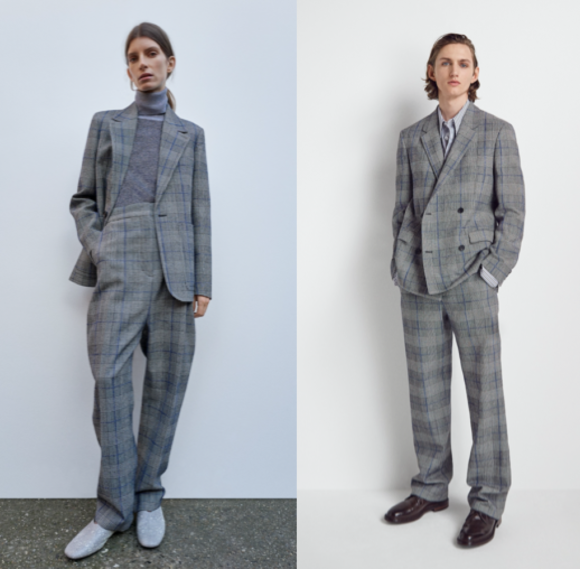 In January of 2015 Alessandro Michelle caught the fashion world’s attention with his feminine take on menswear in his first collection for Gucci. At that moment androgyny came to the forefront of fashion. Androgyny had been in the air for years in menswear and was a perennial element in women’s wear since Marlene Dietrich famously wore a tuxedo in the 1930 film Morocco, and likely well before that.  Androgyny began to  work both ways, men dressing more like women and women dressing more like men. Now we’re to the point where the sexes are meeting somewhere in the middle or more accurately tilting more towards classic men’s tailoring for all. The Joseph women’s pre fall and men’s fall collections bear a striking similarity, sharing fabrics and silhouettes.

In the broader cultural context, as Oprah so powerfully stated in her Golden Globe speech, “a new day is on the horizon”. A perfect storm of events this past year has brought us to the precipice, and fashion in its intuitive way has foreshadowed this.

The two-way androgyny reflected in fashion the past few years coincides with LGBTQ rights and the recognition in our schools, military and workplaces that sexual orientation is not just straight or gay, male or female, but a much broader spectrum, all entitled to the same rights. When fashion portrays men as feminine and women masculine it’s not to suggest that all people will jump on board.  It will however, culturally challenge the stereotypes society has been conditioned to.

When Donald Trump was elected the long sleeping women’s movement was awakened with a start, uniting on January 21st, with worldwide women’s marches. It was a call to action for women of all ages to fight for their rights. This set the stage for the #MeToo movement, and the strength it has gathered in a short period of time. The culture of harassment had heretofore been tolerated, accepted as the status quo, until the revival of the women’s movement.

Here in the US we’re living through the most politically tumultuous times in memory. Historically it’s in times of unrest when change occurs, and for better or worse we’re living through such a time. Using fashion as the bellwether I see a more level playing field for women. To compete with men women need not dress for men, but can learn from the advantage men have enjoyed for years with a reliable uniform of trousers, jacket and functional shoes. That doesn’t mean it has to be boring and void of sex appeal. Prada’s pretty/ugly separates and the powerful Celine woman come to mind, both employ form, function and androgyny.

Dressing for evening is also ready for a reboot. A big night no longer requires a big dress. As award season progresses take note of what looks new to you. The Golden Globes provided a stark comparison of modern versus old school femininity. What do you think?