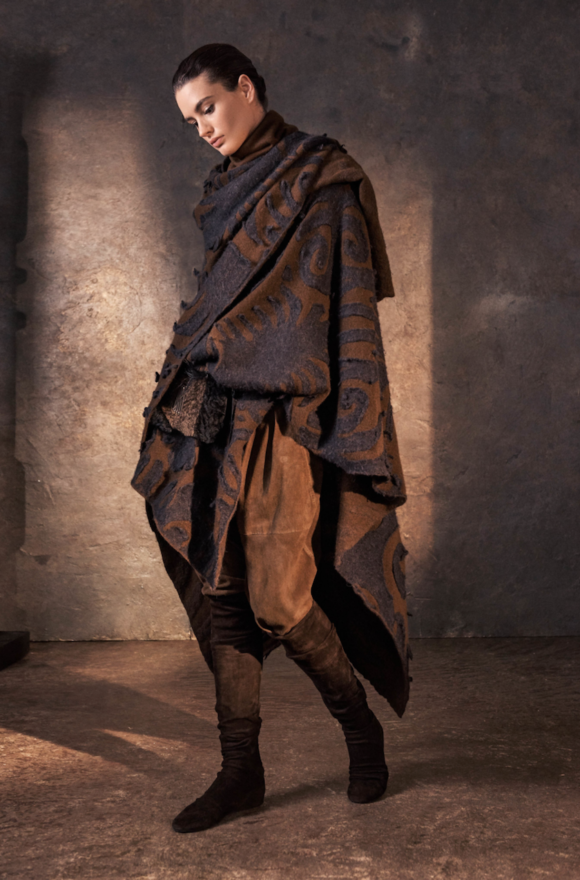 Just as in politics, the fashion press often reports on the latest bright shiny object.  The sensational trumps (no pun intended) substance. I grant you, there are many people who do care what Kendall and Gigi wore last time they exited their Escalade.  I am not among them.  New designers gain traction more for their celebrity connections and mastery of social media manipulation than for their clothes.  While counting clicks has shaped coverage, often at the expense of more meaningful stories. Today’s case in point; Urban Zen.

In 2015 the powers that be at LVMH released Donna Karen from her eponymous brand.  Since then she has quietly been growing her Urban Zen line. Founded in 2007, Urban Zen began as a yoga to street collection that soon became a full lifestyle brand encompassing everything from health and wellness to philanthropic endeavors, most notably in Haiti.

Donna has always been ahead of the curve.  From her seven easy pieces, a wardrobe built with interchangeable components made in jersey, she anticipated that women were ready for more comfortable, sensual career clothes.  With Urban Zen she preceded the now popular concept of enlisting indigenous artisans to craft goods for the western market, in turn preserving traditional crafts while providing economic opportunities for the artisans.  Her Urban Zen Foundation was one of the early champions of integrating western medicine with eastern healing techniques for a more holistic approach to healthcare.

Now Donna is quietly revolutionizing the sagging retail landscape with her latest Urban Zen store that opened this May in Sag Harbor.  Over Labor Day weekend my friend, Eric and I strolled in for a quick look and ending up spending three hours there.  The experience starts before even entering the store as you’re led off the street and into a tranquil garden with root benches from Bali and giant stone planters. We bumped into Edward Wilkerson, an amazing artist, designer and collector, at the entrance.  Edward has a long history with Donna and recently rejoined her team.  Inside it’s equal parts restaurant, home, clothing and accessories. Two enormous white sofas dominate the center of the store. The atmosphere is so relaxed and friendly I witnessed a husband napping contently on one of them for quite some time. Curated treasures from artisans around the world fill the store. Many of the items are handmade and one of a kind. The atmosphere is very personal, you know you’ve entered Donna’s world.

But back to Donna’s first love, clothes, and there too she is well ahead of the crowd.   She’s one of the few to successfully marry today’s casual approach to dressing to the luxury market.  Exquisitely crafted cashmere, leather, suede and silk, manufactured in Italy, have an unassuming nonchalance. Unlike much of the luxury market today, her pieces cannot be copied by fast fashion. There’s too much care in the uniqueness of cut, and the attention to detail to duplicate it for a price.  The clothes are expensive but unlike designer logo sweatshirts, they’re worth it.

Urban Zen is the full realization of Donna’s vision, for clothing, philanthropy, wellness and giving back.  It’s not a marketing scheme or a trend; it’s her pure vision. Perhaps she’s ahead of the curve again, building a brand that truly reflects the designer’s convictions.