I think it’s time for another PD Fifty over Forty story. But until then here is the most recent installment on the inimitable Tilda Swinton originally posted in March 2018.

I’ve had Tilda Swinton on my mind lately, maybe it started when I used a picture of her from I Am Love to illustrate a recent post about cotton shirts. The next thing I know I’m making a Pinterest board dedicated to her. In any event it piqued my curiosity for this enigmatic star and prompted me to write this latest addition of PD’s Fifty Over Forty.

Tilda Swinton was born November 1960 in London to an aristocratic Anglo-Scots family. The Swintons can trace their lineage and unbroken land ownership back to before the Norman Conquest. From the age of ten she attended the elite boarding school, West Heath Girl’s School, where she was a classmate and friend to Princess Diana. Later she would speak out against Heath and boarding schools in general describing it as “A very lonely and isolating environment” adding “Children need their parents and the love parents can provide”.

She graduated Murry Edwards College at the University of Cambridge with a degree in Social and Political Science. There she briefly joined the Communist Party, attracted to the collaborative spirit of the party, and also began performing on the stage.

She joined the Royal Shakespeare Company but soon enough began acting in independent movies. In 1986 she appeared in Caravaggio, directed by Derek Jarman. The two worked together on seven more films. The collaborative spirit Swinton was drawn to in college continued into her film career. Often working with the same directors for multiple projects, including Luca Guadagnino, Jim Jarmusch and Wes Anderson. Swinton is known to choose projects based on the people stating, “Out of fellowship comes the conversation and then the project”.

Tilda Swinton became a major star without courting Hollywood stardom in the usual sense. In 1992 she was cast in the gender bending title role of Orlando directed by Sally Potter. I remember seeing it at the movies and being blown away; think I’ll have to revisit it soon. A string of more mainstream films followed in the early aughts. Swinton won a BAFTA and  Oscar for best supporting actor for her portrayal of a corporate lawyer in Michael Clayton.

From the get-go Swinton has been a darling to the fashion world with her striking looks, tall, slender frame and propensity towards androgyny. But it goes much deeper than that. Her strong sense of individual style and refusal to conform to society’s prescribed notion of femininity has inspired designers and directors alike. Swinton’s ethereal presence and intelligent demeanor challenge the conventional norms of Hollywood beauty.

Swinton is mother to twins, now twenty, with her former partner, playwright John Byrne. Home is in the Highlands region of Scotland, overlooking the coast. She prefers the country life with her longtime partner, German artist Sandro Kopp, and surrounded by dogs, chickens and nature. Not your average star by any means and a major inspiration for her timeless and ageless sense of personal style. 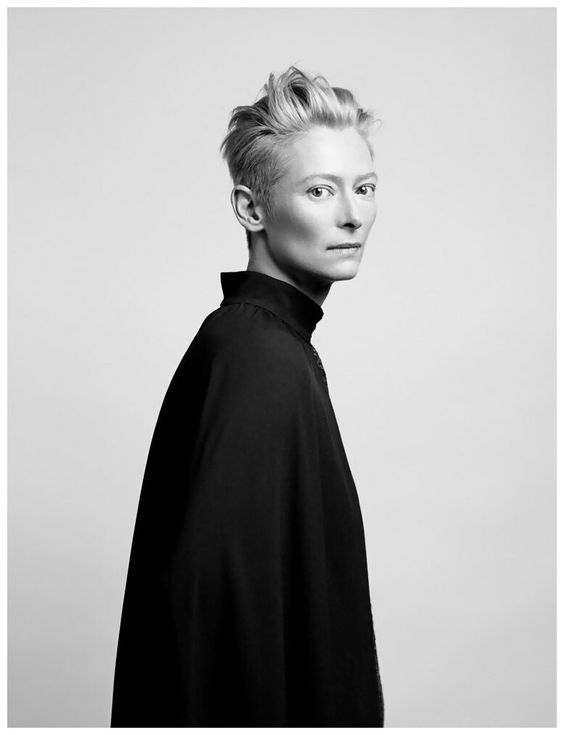