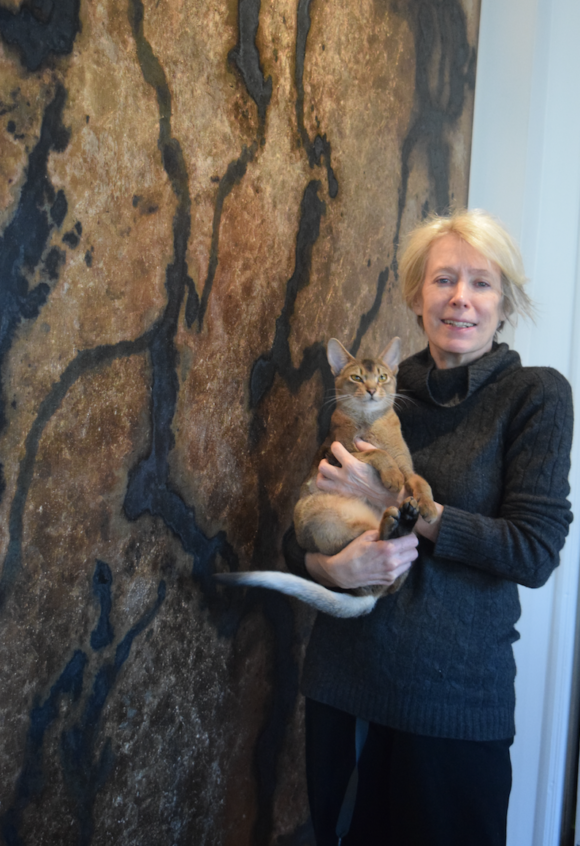 Recently at a party I had the pleasure of meeting the New York based artist, Dove Bradshaw. She is the recipient of many prestigious awards and her work is in the permanent collections of The Metropolitan Museum of Art, The Museum of Modern Art, New York, The National Gallery, Washington and The Centre Pompidou, Paris to name only a few.

Many of her pieces are decades in the making. One of her sculptures is a cube of porous limestone with a glass dropper suspended over it releasing seven drops of water per minute, now for over twenty years. The effects of the drops and evaporation alter the sculpture. For Bradshaw’s large canvases she employs materials that react to the environment instead of paint. Sculptures intended for the outdoors are purposefully conceived of to react to the elements over time shaping the piece. But Bradshaw’s longest work in progress started in the hallowed halls of the Metropolitan Museum of Art in March of 1976 and is still evolving to this day. After meeting, Bradshaw invited me to her home and studio to interview her and hear more about this saga decades in the making. Here’s her story as told to me that day.

Jolain Muller How did this work in progress at the Met begin?

Dove Bradshaw Walking around the museum I saw this very beautiful fire hose and I liked it because it was recessed under glass and 3 dimensional and it’s always mysterious to see something that’s in a box in a wall. I then checked out various fire hoses in the Met and the Whitney, now the Met Breuer, they have the bronze covers but you don’t see the hose or anything, and it’s very designed. This one (in the Met) is utilitarian but also a nice design and it’s got the chicken wire glass that you see through to it.

JM So had you already conceived of this idea?

DB No, I saw it and I just thought it was great and Bill (husband, the artist William Anastasi) said, well everybody thinks they’re great, which was funny, who doesn’t think they’re great? I decided I’m going to claim it. No one has done that and also because it has the function still intact, unlike Duchamp’s found objects, so then I just made a label.

JM Now did this all happen quickly?

DB Yes once I saw it, it all happened quickly. I made up a label, (a museum quality label with all the pertinent artist and material information) and I just called it Fire Hose. I had double stick tape and put it on the wall. It was taken down. I would periodically go in and replace the label. Then I went to the Tutankhamun exhibition, checked on it and the label was up but someone had opened the door and put it inside. Instead of taking it away someone was complicit you see. So I thought oh that gives me the next step, permission. So I decided to make a postcard (mimicking the format of the Met postcards).

DB In New York back then I traded art for it. The printer told me it was 1000 dollars to publish, that was a lot for me at that time, that would be a dollar each, but I didn’t make any money on the whole thing because I was giving them away. (She surreptitiously tucked them onto the Met store with the other contemporary post cards) I bought two, to see if it worked and continued to supply them.

DB A designer from Saks, like a number of people, bought this post card, had blown it up to four feet and colored it like Warhol, using it for a storewide display. I talked to a copyright lawyer who wrote a note for me and I asked for a very modest gift certificate for 100 dollars. They gave me the certificate but by that time I wanted one of those posters,  they were all gone.

JM But you proved ownership of the work!

DB Later I made 1000 dollars on the original photograph because I had a collector (Mr. and Mrs. Robert E. Kline) buy the photograph and donate it in their name to the Met, which they accepted.

DB The Met then issued their own fire hose postcard. They did a run of 10 thousand and they sold out but. They will never reissue it because the photo department has fifty-thousand images, so you know they’re not going to redo it.

In 1993 Bradshaw changed the label to read Performance from Fire Hose and later sold the label as a work of art.

DB Then there’s the story with the label, I charged eighteen thousand for it. I know that’s hefty for just a piece of cardboard. The collector, Roz Jacobs, asked can I donate the money to the Met and they can acquire that label and I said that bypasses the curators, otherwise people would buy their way into the Met all the time. So you can’t. I convinced her, I said you know artists make work and they never know if it’s going to get anywhere. It’s much more exciting if you take the risk with me. I also gave her a work, but you know I still said that was the price I was looking for and anyway she was game and it got in the collection. Known for her Dada collection, she has the famous photograph by Man Ray of the woman’s back (Le Violin d’Ingres) she has the original. She knew Man Ray, she knew Duchamp. You saw (the letter) what Philippe de Montebello said, “We’re very pleased to accept your contribution, but reserved the right to not keep it up all the time.” Well, in ten years they haven’t kept it up at all unless no one told me. They don’t tell you when your work is up.

In December Performance, the actual fire hose entered the permanent collection of the Metropolitan Museum of Art, though an official label has not yet been added.

DB 11 years later I did the next intervention, which was posting all the fire hoses that I could find but there’s probably more I must have missed, they’re a lot of fire hoses. Also it’s a lot of production to do those labels, I have to glue them on to a thicker piece of cardboard, I have them printed, of course high quality printing, and glue it without any glitches and then cut the cardboard very carefully so you know to do about a dozen of those took me a while. And then they take them away, but I think they kind of know me there by now, in some of the departments.

JM so what’s next for you in this saga?

DB I’ve been trying for the Met to put up a label, which they have not done.

JM Because you were legitimized years ago?

DB Yeah, eleven years ago already, and I won’t stop until they give me a label.

DB Yeah a real label and train a light on it, a light! Come on!

JM And for my last question; what do you think is the most important human quality?

So next time you’re in the Met notice the fire hoses and if they have labels attributed to Dove Bradshaw, particularly the original fire hose encased in the north west wall of the grand mezzanine. The saga continues.