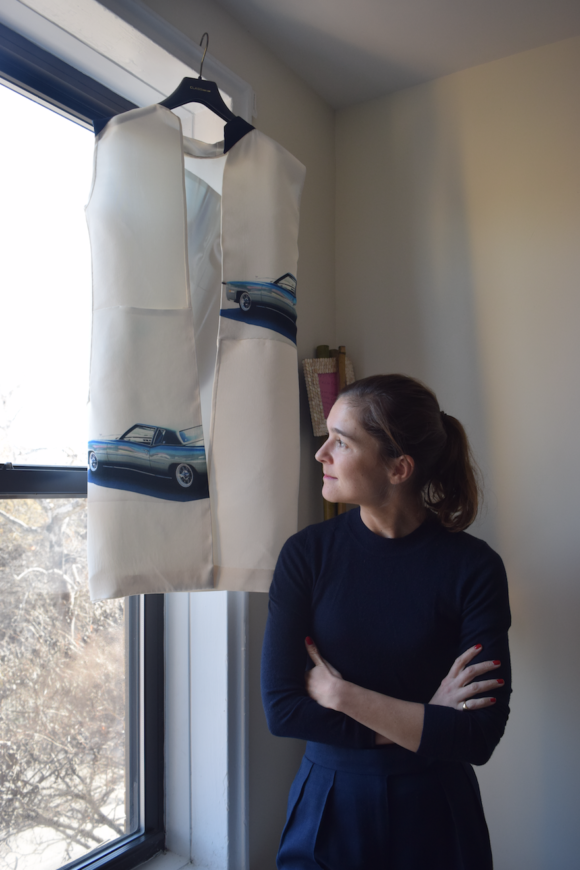 At a party in the home of Beatrix Ost, I met the French designer Fanny Karst. That night she was elegantly dressed in a sweater, heels and a beautiful pair of silk printed pants. The pants were the perfect cut, with an abstract print that she explained was from a photo she took of venetian blinds blown up. Fanny’s collection revolves around the digital prints she manipulates to fit each style. But what makes her a fashion outlier is her intentional focus on an older clientele and her mandate to do all the work, cutting and sewing included, herself. Here’s her story as recorded on a recent visit to see her work.

Jolain Muller How did you get started?

Fanny Karst I was based in London where I spent part of my childhood and studied at (Central) Saint Martins. While I was studying I spent a year in Saville Row at the men’s tailors. I learned how to sew and how to cut and how to fit very slowly. It was very serious but the tailors were absolutely lovely. They never had an apprentice before and of course I was studying at St Martins which seemed like a kind of crazy art school, I was a girl, I was French and also I was left handed so that meant they had to teach me everything in a mirror which is complicated. I had the best time there, I was making tea and learning how to sew, it was absolutely my favorite. I’m still very close to them and do fittings there when I’m in London. It was kind of the contrast of the messy arty education and then the very serious quiet skill.

JM Do you sew your own samples?

FK Yes I do everything myself and finishings and fittings, it would be hard to give it up. I don’t know if I could trust anyone to do sewing for me but it’s really what I love to do. Like an artist I work on commission. I show when I want, I never do really a show, I do a film or something. Yeah it’s a different way of working, I work very slowly and as long as I pay the rent and a few more things I don’t think I need much more.

JM So you have private clients? How do you sell the clothes?

FK Yes I have private clients who come in for fittings and I make a nice little thing for them that’s special. All my clients are a little bit older which is what I go for, but I do have a few younger clients because you can’t say no to them. I show sometimes, I do these kind of small and spontaneous happenings; I’ve done many in London and in Paris and Belgium.

On the side I have this thing with Ari, (Ari Seth Cohen of Advanced Style) we wanted to reach the ladies because I’m in this secret cave here, and do a collaboration on the idea of an elegant tee shirt because it’s got energy and a look people would notice at that age. It takes a lot of thinking but in a way it’s been more successful than we ever expected and it’s been really good, we’ve sold them all around the world, it’s very popular in Canada and in Australia. I have a lot of ladies that wear it in the old peoples homes in Florida and California, I kind of like the idea that these ladies are moving around America wearing the tee shirts, it’s like a club, they like it. They email me to tell me how many people have stopped them in the streets.

JM It’s also kind of empowering because they’re owning their age. How did you come to your decision to design for older woman?

FK before I started studying fashion I already knew I wanted to specialize in old ladies, I think I was 18. I thought about them all the time when I was in college and after. I come from a family where my grandparents were always the most important people in the family; we considered them the queen and king of the house. The women in my family have a strong character. In southwest of France they take care of the house, the family, of everything. They’re a very strong kind of a woman, masculine figures in a sense because they were always the strongest. The men were always the artists. So I grew up admiring older people in my family and then I started to get obsessions with artists that I admired like Louise Bourgeoise, and Andrée Putman and in England there were some women that I just love and they were all in their 80’s.

Nowadays I really think about my mother a lot, she’s 73 but she’s so cool, she dresses a bit like my nephews, her grandsons. She wears trainers; her taste is impeccable but very modern. There’s a whole generation who grew up in the 50’s and 60’s with the rock and roll and this kind of pop life wearing jeans and tee shirts and smoking and drinking. They are growing exactly as they were when they were young. So they’re super cool and I admire them and admire their freedom and independence. That’s what I think of when I design I really believe that with age comes a lot of rebellion and a very subtle elegance.

I think the whole age situation is something we should really think about and not just for clothes, it’s all about the lifestyle and the way you see older people and I really want to put them on a pedestal and really show that they are the cool people. I think you’re very young when you’re in your eighties, it’s like a second youth, and it’s hard to make the message come across sometimes.

JM I think what Ari is doing is amazing because I really think he was the first person to say look at these fabulous people and it really caught on. How did you two find each other?

FK I had a show in Paris, he was starting his blog, photographing people in New York, I’m getting excited about the city and he posted because I had a beautiful older model Monique. He came to London to do something and we became friends and then we became very close friends. Now I feel we’re the only two people interested in older ladies and we have this big friendship around that.

JM When did you make the move to New York?

FK I moved to New York four years ago. I first came to see some ladies, but I was also volunteering and just to see what was happening for two months. After three weeks I felt really at home. Then I met my now husband, I went back to London for one year and got my visa. I didn’t move quite for love though it helped to go through the visa process. But I had a plan in case it didn’t work for love; I was going to get a nice studio.

JM Tell me about your prints.

FK I only do digital printing. So that’s really exciting, I like taking pictures, you can take pictures and print them giant.

FK For that I took a picture off the YouTube screen, then I clean it up and look how beautiful, the reflection of the street in the car is crazy and actually are the colors you get naturally from a YouTube screen. When you take something very hard like a YouTube clip or pretty tough things like chicken wire or smoke and it looks very harsh on the computer, as you print it on silk it becomes this delicate painting. That’s why I love digital printing, you can really print anything, and also you have the luxury with prints to do something very flattering because you can make everything kind of narrow or with a swing, it’s completely trompe l’oeil.

It’s like making a photocopy but you get some beautiful results. I’ve done digital printing for almost ten years now. It’s a luxury that not many designers do because it’s kind of expensive. I do everything myself with placement.

JM Do you have to do many tries to get the color right?

FK No none, Now I have the experience I know a little bit what’s going to print well and what’s not going to, but I like the fact that the image can surprise you.

JM How can people find you?

JM Is there anything else coming up?

FK I’m doing costumes for Isabella Rossellini at the moment. For the last few years she’s been studying animal science behavior. She goes to University twice a week and now she’s doing a show to illustrate what she’s learned. I love working with her, she’s fantastic, she does everything herself, works very hard, and knows exactly what she wants, she’s a very creative person It’s filming in March in Barcelona and it will come to NY (Off Broadway) in May.

JM And for the last question, what do you think is the most important human quality?

FK Well I think the best quality a person can have is to be funny, I would say funny but not mean. I think people who are funny and witty, really it’s the quality I admire the most, sometimes it’s very hidden but I love people that are funny. I think to be funny is the highest intelligence.

JM Thank you Fanny Karst, this has been fun!