Or Rebel With A Platinum Card. Maria Grazia Chiuri has been tuned into the turbulent
times we live in and has used it as inspiration for the Christian Dior collections from the get go. This time around, tear sheets from sixties fashion magazines with feminist slogans were plastered on every available surface. Her feminist tee shirts pre date #metoo. But is it genuine or just a ploy to make luxury customers feel socially conscious or make an established brand hip? It makes me a little uneasy, though I agree with the message; I fear the important issue of women’s rights will lose some credibility if it’s hijacked for commercial purposes.

After the horrors of the Parkland shooting, with 17 souls lost, we witnessed genuine protest in the form of student survivors of the shooting. Their courage and authenticity changed the trajectory of a stalled debate. I don’t get the same feeling of admiration and commitment from watching a fashion show. Am I the only one feeling this?

Theme aside there was plenty to like. You can always count on Dior for jackets and coats. I would bet the atelier has some of the best tailoring hands in the business. The black blazers worn with slouchy trousers were sublime though they looked like the Pre Fall offerings. The patchwork and crochet however, took the theme a bit too literally for me.

Denim has been a mainstay for Christian Dior under Chiuri. For fall the denim dress made patchwork look modern. Wide D belts, destined to be ubiquitous this fall, tightly cinched waists. Heavy boots and the occasional clog rounded out the ready for the revolution footwear, grounding the utilitarian chic mixed with late sixties hippy that pervaded the collection. See the entire show here or photos on vogue.com. 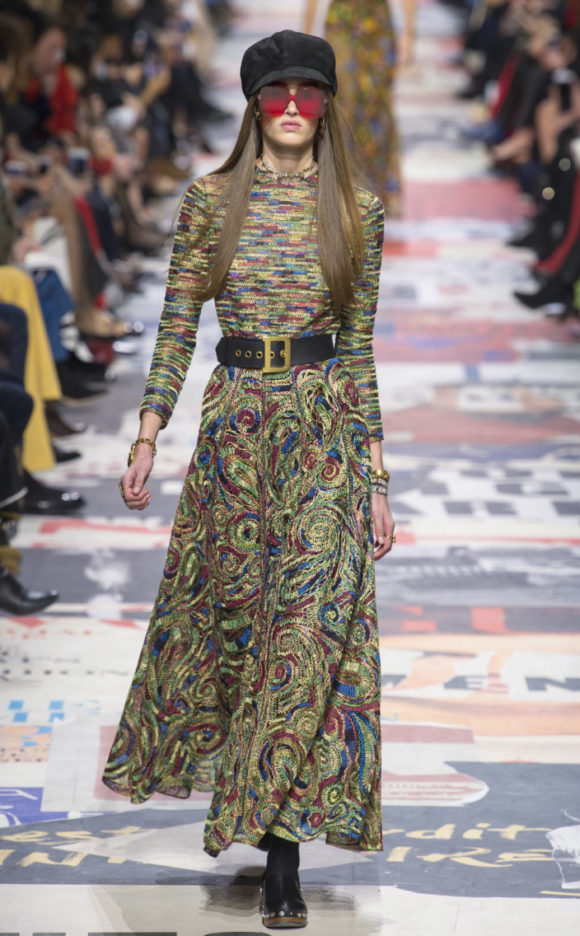