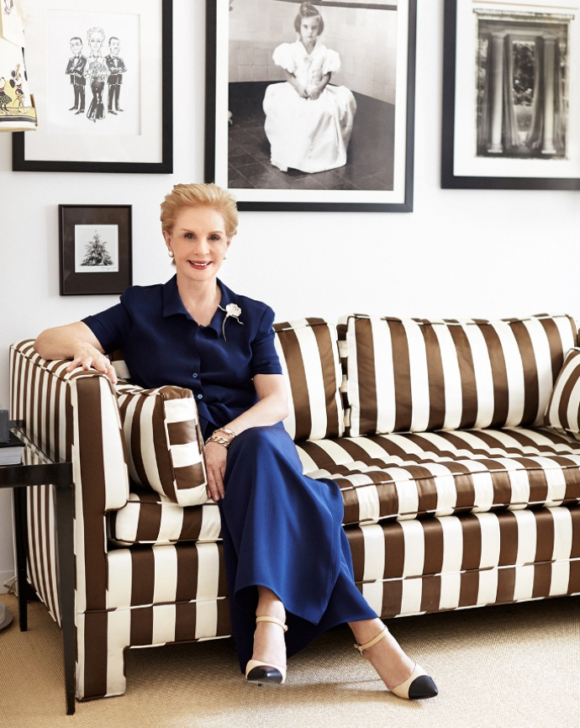 This evening at the Museum of Modern Art the eyes of the fashion world will be on Carolina Herrera as she takes a final bow after her Fall ’18 show. She is stepping away from day-to-day design duties, and will assume the role of brand ambassador. Wes Gordon has been named Creative Director. It marks the end of an era for New York fashion. She is the last of the old school New York designers. Bill Blass, Oscar de la Renta, Geoffrey Beene and Carolina Herrera were the designers to the elite, the bearers of the torch for refinement and taste.

In the new world order, Mrs. Herrera or Mrs. H. as she is known to her employees, sold her company to the Spanish fragrance giant Puig in 1995, ensuring the longevity of her name. The Carolina Herrera brand, including fragrances and the CH licensed collection now generate a reported 1.4 billion in annual sales.

I had the pleasure of working for Mrs. Herrera from 2012 to 2016. I was hired to design the knitwear for the collection. Just as I started the job my marriage went into crisis, quickly leading to separation and divorce. The job for me was a lifesaver. My personal life was fraught with adversity and sadness but as soon as I stepped off the elevator into the elegant and orderly world of Carolina Herrera my problems melted from my mind and I could fully concentrate on my work. The happy atmosphere of the offices, the beautiful environment and most of all the warmth and wit of the people I worked with saved me.

At that time it was a small and tight design team lead by the extremely talented Hervé Pierre. Ludwig Heissmeyer was the design director and had been working together with Hervé for many years. Three others were hired around the same time rounding out the team. Through hard work and lots of laughs the new group immediately bonded. Hervé is one of the funniest people I know, it was almost mandated that you had to be funny to pull your weight. And despite the formality of the office, (no paper coffee cups, women were to dress up and wear heels) there was always laughter.

The light atmosphere came from the top. Mrs. Herrera has a sharp wit and was always joking and laughing. Fittings, which in many design houses can be tense, were usually filled with levity. Held in Hervé’s office Mrs. H. and her daughter Patricia would sit on chairs upholstered in the Herrera brown and white silk stripe. As our ravishing Brazilian house model Renata entered the room in a look to be considered, Mrs. H. would sometimes ask, “and where is she wearing this?” fully expecting the most absurd answer you could think of such as, she’s going to pre-arrange her husbands funeral.

When Mrs. H. arrived at the office it was an event. No matter the season or the weather she was always impeccably elegant. In winter she was resplendent in magnificent furs, in summer her famous crisp white shirt tucked into a skirt and always punctuated with the most magnificent jewelry. Some days her jewels would stop me dead in my tracks and I would have to catch myself from staring. She could wear the most gorgeous pearl and jeweled tassel necklace with a nonchalance that made it all the more appealing. Mrs. H. also had the style and sense to never appear over done, she always looked completely modern and at ease.

I’ll forever be indebted to Carolina Herrera. Through her I’ve made lasting friendships that I could not imagine my life without. I grew as a designer and a person and saw first hand that age is relative and style is forever. On my last day at the company Mrs. H. took me out to lunch along with Ludwig. The company was going through a difficult period but talk at lunch was upbeat. We talked mainly about the future and new possibilities, which was classic Mrs. H., always moving forward.