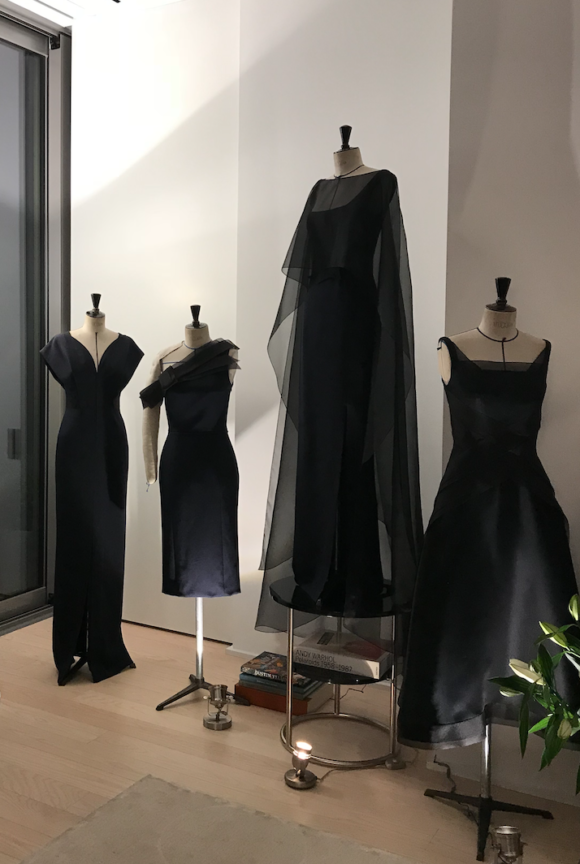 This story was originally posted on December 6, 2017

Atelier Caito for Hervé Pierre, was launched last night at a tasteful champagne reception in Soho. The twelve evening and cocktail dresses, displayed on mannequins, allowed the well heeled industry types, including Carolina Herrera and Adrienne Vittadini, to appreciate the subtle details and intricate seaming of each piece. There was a lot of love in the room for Hervé Pierre and Nicolas Caito. Their slow fashion approach with an emphasis on quality, craft and timeless style resonated with this crowd.

It’s a very gutsy prospect to throw yet another hat into a very crowded ring. Every fashion week cycle the grumblings start anew, too many shows, too much product and hard to make sense of it all. With the advent of huge public fashion conglomerates it’s harder than ever for a start up to get a place at the table. Yet there are those who still take on the challenge. A small entity can have a competitive edge when they offer a level of specialization and expertise that may get lost in the frantic pace and high talent turnover of corporate entities. Last week I wrote about the small Paris based company Pallas, which offers expertise in tailoring. This week the opening of Atelier Caito for Hervé Pierre offers unrivaled expertise in the art of designing and constructing the dress.

Hervé Pierre has been working behind the scenes for high profile houses his entire career. In 1991 he was named creative director for Balmain in Paris. At 26 he was one of the youngest designers in the history of couture. When Oscar de la Renta took over design for Balmain Couture he lured Pierre to New York to join his studio. I worked in the design studio of de la Renta after Hervé left for Vera Wang and later Bill Blass. Stories were still buzzing there of this amazingly talented French designer, as funny as he was creative. He then went to Carolina Herrera where he was the creative director for fourteen years. It was there that I finally had the pleasure of meeting and working with Hervé. He is one of the most talented people I know; in fashion and everything he touches. This video, which appeared on nytimes online in September, will give you a taste of his unique persona.

Nicolas Caito, the other half of Atelier Caito for Hervé Pierre, has an equally compelling history. He began at Lanvin and was premier atelier (head draper and in charge of the sample room) at Hermes when Martin Margiela was the creative director. I remember that as a particularly fertile time for Hermes ready to wear. Caito then spent two years in New York where he met Pierre while they both worked for Bill Blass. He returned to Paris to work at Rochas with Oliver Theyskens. Then one morning he woke up and decided to move back to New York and open his own atelier. In 2005 he established Atelier Caito in New York’s garment center and immediately attracted a top tier clientele such as Calvin Klein when Francisco Costa was creative director, Proenza Schouler and Zac Posen.

Unusual circumstances would bring these two super talents together again. After Hervé left Herrera he was consulting for other design houses and planning his next move.   A recommendation led to a meeting with Melania Trump who was looking for help in planning her official wardrobe. She met with Hervé, immediately recognized his talent, and asked him to design her gown for the inauguration. This was ten days before the event; luckily another talent of Hervé’s is the ability to work fast under pressure without sacrificing quality. He asked Caito to help him with the dress. The gown was a bipartisan sensation and their collaboration continued. In August Caito woke up with another idea, to develop a collection as partners with Pierre. Four months later Atelier Caito for Hervé Pierre debuted .

All the dresses are in black or navy with prices starting at $1,700 to $7000.  The clothes will arrive in stores in the spring, update on where to come. The duo will show two collections a year which are not named by season.  Taking the time to design and craft extraordinary clothes sounds like a recipe for success to me.