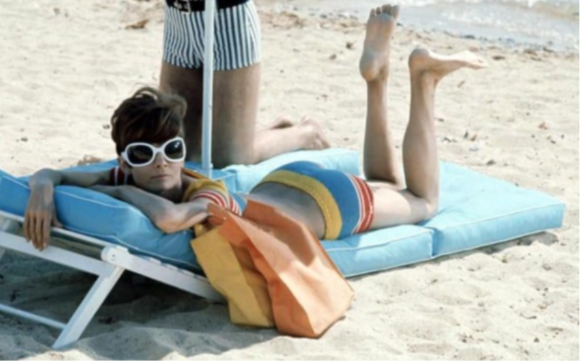 This story was first published in June of 2017 and was the first in the Holy Trinity of Style Series. The second of the series on Jackie O was republished last Sunday.  The final installment on Princess Grace will appear in the coming weeks.

This September Christies in London will hold an auction for select personal treasures of fashion icon and beloved star, Audrey Hepburn.
A 1980 Burberry trench, a monogramed silver compact and a custom made Givenchy silk cloqué cocktail dress made for a publicity still for Two For The Road are among the offerings. All the recent publicity for the sale reminded me of the enduring style legacy Audrey Hepburn left us with.

To me, she is among what I call The Holy Trinity of Style, the other two being Jackie Kennedy Onassis and Princess Grace. These three women, who were in my opinion the most influential and enduring icons of style in the twentieth century. They were all born in 1929 and were all 5’ 7” in height, an interesting fact to note. In the coming months I’ll write about each of them but for today it’s all about Audrey.

Born Audrey Kathleen Hepburn-Ruston near Brussels to an English banker father and a Dutch Baroness. Her early life was spent in England. In 1935 her parents divorced and her mother decided to move back to the Netherlands for safety with the onset of WWII. The following year the Netherlands was invaded and Audrey, her mother and two half brothers nearly starved during the five years of Nazi occupation. The malnutrition of childhood left Hepburn with delicate health for her entire life.

After the war the family moved back to London where Hepburn studied ballet. Her ambition was to be a dancer but lost precious time during the war to train. She modeled and also began playing bit parts. In 1951, as legend has it, while walking along the Monaco seafront, Hepburn was discovered by Collette, the author of the novelette Gigi. She was subsequently cast in the lead role of the Broadway production of Gigi and was an instant sensation. In 1953 she was cast with Gregory Peck in Roman Holiday, for which she won the best actress Oscar for her portrayal of Princess Anne and was catapulted to stardom.

Hepburn’s next three major films, Sabrina in 1954, Funny Face in 1957 and Breakfast at Tiffanys in 1961 forever sealed her position as a style icon and defined her image. As glorious as those were however, I would argue that her later films, Charade 1963, How to Steal a Million 1966 and Two for the Road 1967 were even chicer, displaying the epitome of sixties high style. I highly recommend all three films especially Two for the Road, a poignant film that follows a couple from their first meeting as young travelers to a world weary upper class couple in a troubled marriage. Her style evolution is nothing short of brilliant and a departure from her couture Givenchy looks of other films (not that there’s anything wrong with that), leaning more toward the mod side of the sixties.

In 1988 Hepburn became the Goodwill Ambassador for Unicef. She dedicated herself to raising awareness for the plight of starving children throughout the world, having suffered deprivation as a child herself. Her two sons, Sean Ferrer from her marriage to the American actor Mel Ferrer (1954 to 1968) and Luca Dotti, from her marriage to the Italian doctor Andrea Dotti (1969 to 1982), continue her philanthropic work through the Audrey Hepburn Children’s Fund.

Hepburn’s companion until her death was Dutch Actor Robert Wolders, whom she described as the love of her life. She died in 1993 at the age of 63 from cancer of the colon. Now over twenty years after her death a new generation is falling in love with her beauty, style, grace and kindness, which was apparent in everything she did.