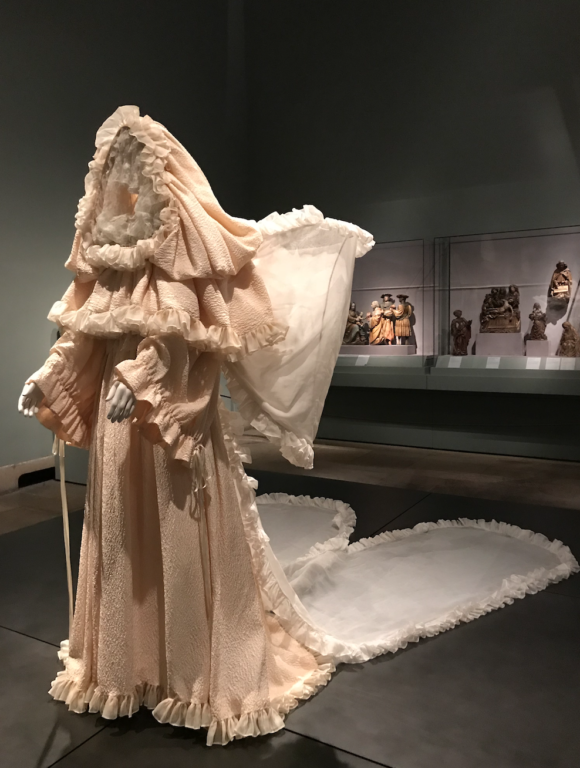 This year’s Costume Institute exhibit, Heavenly Bodies: Fashion and the Catholic Imagination, is the largest to date, spread out in three sites at two museums.  In the basement gallery are vestments on loan from the Vatican.  This is where you see the real deal.  The highest of haute couture has nothing on the Vatican finery where jewels and intricate embroidery weave Catholic lore onto its sacred robes.

The heart of Heavenly Bodies is artfully staged amongst the art in the Byzantine and medieval galleries on the first floor.  European designers dominate with Jean Paul Gaultier, Yves Saint Laurent and John Galliano well represented among others.  Fashion and religion seem like strange bedfellows but iconography and opulence weigh heavily in both.  There was plenty for designers to work with, Madonnas, angels, nuns, priests, and crosses, oh so many crosses.  Though beautiful to look at Catholicism’s imprint on the clothes sometimes veered toward costume design without the sieve of the designer’s own psyche as interpreter. This left me wanting for more.  For that, as I learned, I would have to travel uptown to the Cloisters where the show continues.  But that is for another day.  Until then here are photos taken at the Met, 5th Avenue.